The Vine Events’ visionary and workshop facilitator Tonya Cross is hosting an in-person marketing intensive on Saturday, December 14th! The event will be held from 10am – 3pm EST at Vibes, 1024 S. Fulton Street, Unit 2, Salisbury, NC 28144.

Do you have a marketing strategy for your brand, business, or organization for 2020? If you answered NO, this event is for YOU! During the intensive you’ll have an opportunity to develop a digital marketing strategy that’ll expand your customer reach. Tonya will also share marketing advice and tips that got her women’s fashion accessory brand Accented Glory featured on Essence and MarthaStewart.com Shops as Etsy Finds! The cost for this event is $55. Invest in yourself and your vision by purchasing your ticket on Eventbrite by Saturday, December 7th! 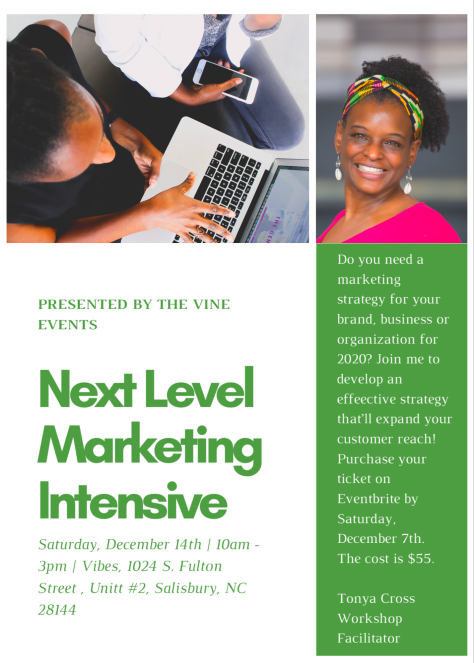 The topic of discussion in The Vine Events’ entrepreneur Facebook support group this month is Social Media Campaigns! What’s a social media campaign? It is a marketing tool used to reach a business goal using social media platforms. Whether your focus is to drive more traffic to your website or increase brand awareness, a social media campaign is a great digital marketing tool. Click here to join Digital Marketing On A Budget support group for the not so tech savvy!

For the month of February, The Vine Events is celebrating Black History Month and we will highlight African American entrepreneurs on our social network pages. Our theme is “Black History In The Making” and our focus is “Community”. We’re kicking off our celebration with an article about high fashion designer Avnah Davis-Long written by guest blogger Desere’ Cross. We chose Mrs. Davis-Long because her life experiences parallel the story of struggle and triumph of African American people.

“Although my whole life was rough, God kept me and brought me out a new person with no limitation. He has instilled in my heart that everything that ever happened to me is my history, not my destiny, and I have seen Him work amazing things out in my life.” – Avnah Davis-Long.

Our specialty is informative events such as, Q&A parties, screening dialogues, interpersonal workshops, and community forums. We offer both face-to-face and online event designs. Contact us today for a “free” consultation for your next meeting/event.

What does Kelly Rowland, high fashion, and Salisbury, NC all have in common? They have all come into contact with Avnah Davis-Long, a high fashion designer who has humble beginnings in Salisbury, NC.

Davis-Long moved from Ohio to Salisbury at age 12 and attended Knox Middle School, Salisbury High School, and Rowan Cabarrus Community College. At age 20, she moved to Atlanta, GA and opened a hair salon. From there, she grew her salon business. Inside of her salon, she would dress mannequins in her clothing designs. After receiving inquiries from salon clients about where they could buy the clothes draped on the mannequins, Davis-Long began to invest her income from her salon into fabric for her designs. The success of her fashion design business soon exceeded that of her hair salon, and she had to decide which passion to pursue; fashion designer or hair stylist? She chose fashion.

Davis-Long began crocheting when she was young. It was something her mom thought would be good for her to learn. This hobby that Davis-Long describes as something she was “forced” into doing, ended up jump-starting her career. Davis-Long’s first fashion line was a crochet swimwear collection, which resulted in her entering the fashion world as a notable crochet designer. In 2003, she trademarked the fashion line Avnah Couture and incorporated sewing into her line in 2006. In 2012, “Couture” was dropped from the original name, and the line was rebranded as AVNAH. AVNAH has been described as edgy, futuristic, and unique and has been featured at the New York Fashion Week, Atlanta International Fashion Week, and CIAA Fashion Week. Grammy award winner, Kelly Rowland, was the first celebrity to wear AVNAH. The collection is now being sold on Melrose Avenue in Los Angeles, CA and has been worn by Sasha Pieterse from ABC Family’s Pretty Little Liars, Cynthia Bailey from The Real Housewives of Atlanta, and many more.

Being the owner of a high fashion boutique requires wearing many hats, and according to Davis-Long, this is one of many obstacles to being an entrepreneur.
“I do everything, from sewing to administrative tasks,” Davis-Long said. However, during 2013, she plans to have her fashion line mass produced in a manufacturing plant. This will allow her to focus on personal aspects of the design process, such as creativity. When asked if she had any advice for aspiring entrepreneurs, Davis-Long said “you have to have thick skin…sometimes, when you take criticism the wrong way, it hinders you.” She also encouraged entrepreneurs to persevere even after being told “no.”

Although Davis-Long moved to Atlanta because it provided her with opportunities for what she wanted to do, she has not forgotten Salisbury. In the past, Davis-Long has had several speaking engagements in Salisbury, including one at Salisbury High School. Ultimately, Davis-Long said she wants her brand to have meaning behind it. By giving back to those in her community who need help and guidance, Davis-Long is able to exemplify philanthropy. In Georgia, she has worked with the Boys and Girls Club on different events and projects, such as sponsoring sewing workshops. She has also provided free demos for cosmetology schools in Georgia.

If you’d like to find out more about AVNAH or shop at their online store visit http://www.avnah.com.

There was an error retrieving images from Instagram. An attempt will be remade in a few minutes.